[Disclaimer : We had the opportunity of reviewing the previous works of the author. Those were all in the story form. This is different – this is a survey of something which is beyond survey, not for its vastness alone but for the subject matter itself. In 240 pages, the author has attempted and attempted very successfully to convey the essentials and also with an eye to the contemporary time. The word “ancient” is silently present behind the word Hindu / Hindoo in discourse  and for some mysterious reason, this “ancient fossil” aspect appears to have gotten new lease of Life in each historical age. Had this been not so, this book would not have been written ]

More than two thousand five hundred years back, Buddhism and Jainism were contemporaries and Budhha and Mahavir  preached in the same locality quite often and one of the areas is present Bihar. Their world-view were sometimes radically different. People listened to both –  to Tirthankar and Tathagata with no disturbance. Both the tradition flourished and endured.

The book quotes from a credible source ( a Frenchman writing a book entitled L‘Inde des Rajahs)  narrating an incident in Benares in 1876 where a missionary was preaching Christianity and admonishing people of worshiping of the black rock as rank idolatry. People listened to and no disturbance at all. Everyone went with their own business.

The book is a part of that continuity. This itself is a success and the title of the book confirms it. 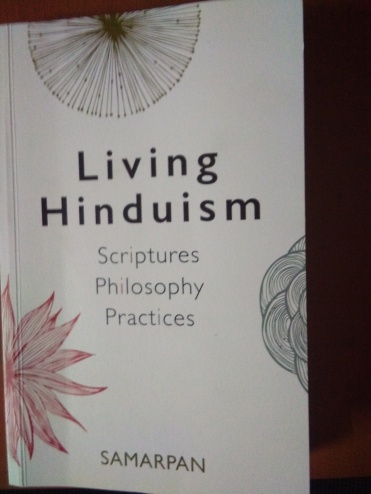 Without much ado, let me clarify my position as a reader-reviewer, a Hindu/Hindoo and disclose the metaphorical and literal lens I shall be using.  With the charge of being arbitrary completely accepted, I may say that for a Hindu born in India after 1750, it is historically impossible to have any “pure Hindu” lens. First, the source Vedic text needed some “made easy dictionaries” almost a thousand years back to understand. Second, the nature, structure, richness and infinite malleability of Sanskrit language. Third,  discontinuity in the political / government sphere due to repeated foreign contact, attack, hit-and-run, capitulation and consolidation of political power by successive foreign elements.

In this way, India can be considered a feminine womb which has always attracted the most vigorous and out-bound masculine forces in history.  Swami Vivekananda ruminates while visiting ruins of Capitol in Rome : “.. from where all-powerful Ceasars used to rule larger part of the world, today spider is weaving its net in the Capitoline Hill…” and then he reminds us that “.. if ancient sages come back to India today, they will not be at all bewildered for they will see the inner unity in all the outward variety.”  [ Paraphrased by reviewer ]

It is true. No civilization completely dies. Greece and Rome are present – in thinner form in the modern European Civilization. This word “thinner” I borrow from the book itself where the author talks about Puranas and other supplementary literature of Hindus (whose complete disregard for balance, measure, precision and accuracy were immediately observed by Al-Beruni[12th century] to  Macaulay [19th century]  ) but they missed the full picture. There was a deliberate plan in this thinning just like we dissolve things in water to have the active ingredient have better flow, reach and acceptance. Here is a fundamental look on life – the Art of Becoming is much greater than the Art of simply being precise and accurate for a certain historical fashionable period.

The wonder of Hindu Civilization is that it has remained relatively more intact form in spite of being hammered across ages. This reminds me of the internal integrity and consistency of genetic code. Genetic Codes are made from small number of atoms and yet they retain their integrity and consistency across millions of years till some mutation sets in. This mystery was raised by the seminal thinker of Quantum Physics, Erwin Schrodinger in his very very small book entitled – What is Life ?

The Grand Recycling of Debt and Payback of Civilizations

The structure of the Book  with of codification / classification / analysis is a lack  which was immediately observed by the last contact with Hindus with another civilization, I mean the ambassador of modern Europe, The Britons, first in the form of fortune hunters, missionaries, economic migrants (just like most of Indian economic migrants in USA, UK, Persian Gulf, Africa and other parts of the globe) and then imperial burden-bearers – the burden of the Empire (The Raj) and also the bearer of the self-imposed burden of racial manifest destiny  – the white man’s burden.

Finally – those from Ox-Cam network and ICS (pre-cursor of our IAS and IPS framework) happened. It is told that in the zenith of the Empire, ICS was perhaps one of the “dream jobs” globally.  I think the closest one can think of ICS today is to become some Investment Banker responsible for a geographical region for a “too big to fail” financial or trans-national corporation with inter-locked ownership and control. Our ancient sages would not have been wondering at all on this observation. They had been exposed to the cosmic classification of living beings as per innate quality and  activity which can be mapped into 4 types just like management books talk of 4-quadrant BCG boxes in classifying companies. They would have remarked – “Oh… I see, now the clock of dominance is moving from administrators to money-managers.”

India’s history since last thousand years demonstrate a cyclical contact with Turko-Persian-Afghan cultural sphere, followed by British and European and in each phase or in historical cycle where dominance has varied, India responded and changed but not so much as un-recognizable. This  is a “living” proof of the sign of Life : reaction, absorption and assimilation.  Only a living consciousness is capable of these functions.

The Book captures this in an undertone while it moves with a taxonomist’s eye for classification and cataloging and this is a triumph. The author has masked tremendous scholarship and this is the last barrier to be breached by scholar of any discipline.

The Future Readers or Readers of the Future

Since I and all the future readers of the book are born after my arbitrary dateline of 1750, the book is a rarity that it says something so beautiful, so radical, yet so naturally – “we need to write new Puranas.” I think these are being written continuously, we need to be conscious of it. All the space-time defying magic realism of novels and that of films – for elites and plebs alike, all the huge output in social media – these are the Puranas  being written by us of varying quality. If Vyasadeva comes today and checks in our social media, he will not be bewildered at all, he will smile and chuckle and wonder how  his children are creating Tera-bytes of Puranas collectively with their fingers and keyboard.